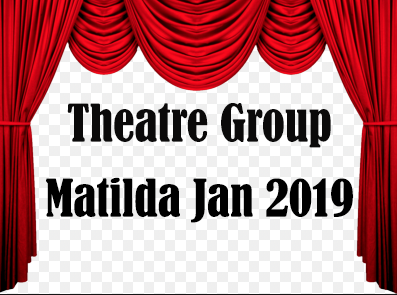 In the 19 years that Mary (Dobson) has been arranging Bude U3A theatre trips, never has one had a final act like the recent visit of 20 members to the Theatre Royal to see the musical ‘Matilda’ on 31st January 2019.  The journey to Plymouth in a Tilley’s coach was unremarkable, just a few hints of sleet in grass verges and distant views of Bodmin Moor and Dartmoor topped by snow. The show itself with its amazingly talented cast of young children was greatly enjoyed by all, but several empty rows of seats in the stalls indicated that a large school group had not made it to the theatre because of the weather.

After the show as we emerged from the theatre snow was falling heavily and when all were aboard the coach for the homeward journey the driver, Wendy Kenyon, having received news of traffic chaos and roads blocked by snow, hinted that we might not make it home that evening. Ever optimistic, however, we set off, crossed the Tamar and passed through the Saltash tunnel, but with traffic moving at a snail’s pace Wendy suggested we stop at Saltash Services. After an hour, having taken advantage of whatever Burger King and Subway had to offer, we pressed on towards Callington. With the traffic frequently coming to halt and with the red rear lights of vehicles stretching into the distance, a suggestion that we stop at St Mellion Golf Hotel seemed infinitely preferable to a night spent sitting in the coach. There the friendly staff, especially the manager Mark Webster, welcomed us warmly and enabled us to take advantage of the hotel’s bar and dining facilities. Later in the evening some of us, including our driver, accepted the offer of rooms that became available while others settled down for the night under duvets on seats in the lounge.

The hotel came to life again at 6.30am when breakfast became available and all were anxious to know if the roads were clear. With the drives leading out of the hotel having been gritted, Wendy decided it was safe to head for home. We said goodbye to receptionist Maria Valerieva, assembled for a group photo with assistant manager Anna Mitchell and boarded the coach for home. All the way the roads were littered with abandoned vehicles but the fields and distant hills, especially the trees with their branches dusted with snow, provided Christmas card sights rarely seen in Cornwall. Finally, 18 hours after we had set out from the theatre, Bude, having been completely spared the snow, came into view like a green oasis in a white desert. As we alighted from the coach, driver Wendy was warmly thanked by all for bringing us safely home.